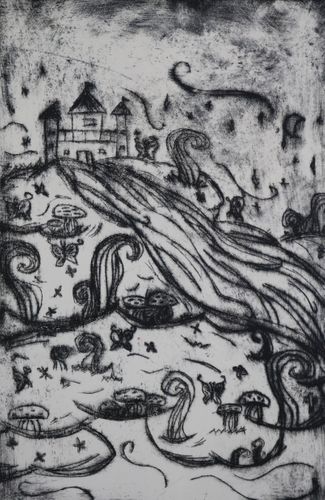 "Catherine crept further under her bedclothes, her blood chilled, a cold sweat on her forehead; she was unable to forget the horrible thoughts the day had brought her. What had begun as an innocent walk through the gardens, a pleasurable tour through the Abbey, had rapidly become a day of terror and suspicion." An excerpt from Sarah Adam's year 12 Literature Creative Response. The accompanying artwork is by Year 11 student Sophie Neil, Narrative Mixed Media. Read on below.

The unfortunate Mrs. Tilney’s confinement weighed upon her mind terribly as she shuddered and tossed about in her bed. Oh, the horror of her circumstance! Reader, how is a heroine to act in such a situation? Such a lady cannot remain in her bed, allowing General Tilney, a cruel man so similar to the villain Montoni, to continue to imprison his wife. Such a heroine must act.

Coming to this realisation herself, Catherine stole quietly from her room to watch through the window in the gallery for the third time that evening. The once clear night had changed, as the rain beat against the window with violence, and the wind raged around the walls of the Abbey. It was near impossible now for Catherine to look through the tempest that stormed outside for a sign, any sign, that the General was preparing to visit the prison of his wife. She shivered again; however, she was not cold. Sitting and waiting at the window, she was unable to forget the horrid scenes of the novels she so loved.

It was fast approaching midnight as Catherine continued her judicious vigil at the window, sure that any second now, the General might make his presence clear. The thought had no sooner formed in her mind than she saw it. A light! How convenient that it should appear so suddenly! The flame that must surely originate from the General’s lamp glimmered through the lower windows of the Abbey, confirming her dreadful suspicions. Her heart fluttered and her cheeks grew pale as she understood the horrible reality of her situation. She could almost hear the sobs of Mrs. Tilney when it seemed as if out of nowhere, distant moans sounded throughout the Abbey and struck on her affrighted ear. Her mind was made up; the necessary actions became clear. Catherine could not hide away and let such a villain continue his acts of tyranny. It was her duty, her responsibility, to venture into the gallery, and uncover the hiding place of the wretched Mrs. Tilney.

It is now expedient to give some explanation of the source of light considered by Catherine as a confirmation of the General’s guilt. I fear that this revelation may disappoint, however it is important to state that the light Catherine so easily assumed originated from General Tilney, instead belonged to the lantern of a passing servant. In her haste and determination to free Mrs. Tilney from her captor, a certainly heroic desire, Catherine instead made a vital error of judgment. Surely such a mistake, made by a heroine with good intentions no less, could have no great consequence. What could possibly go wrong?

Catherine slipped through the long hallway in front of her, creeping as quietly as possible past Eleanor’s room. She could not, in good faith, alert Eleanor to her suspicions. Ensuring that she remained ignorant and slept through the events of tonight, was a necessity. Catherine moved onwards, passing window after window, door after door in search of the gallery. In darkness, the hallway was unfamiliar, strange. The sound of her footsteps on the stone floor seemed deafening in the silence, solely disturbed by the now muted sounds of the tempest still raging outside. The light from her candle created shadows that threw appalling shapes on the walls; Catherine’s knees trembled as she continued onwards. Her fearful curiosity, and even more so, the depth of her dread, was every moment growing greater as she drew closer to her destination. She trembled with terror, as her thoughts were sublimed by the horror of her situation. She had never in her life felt such fear as she did now.

Sooner than she might have hoped, Catherine found herself alone in the gallery, as the clocks began to strike twelve. She searched the room with trepidation, unsure what she was looking for, but feeling the urge to do so just the same. She found it hard to recall her earlier feelings of disappointment at the altered state of the Abbey. Furniture that she had considered to be in the profusion of elegance and modern taste in the light of day, now took on unfamiliar and monstrous shapes. A room that had once appeared large now seemed to be shrinking in size the longer she stood there. On tiptoe, she approached the folding doors that would lead her to Mrs. Tilney and her cruel husband. She paused to listen, and while no sounds indicated that General Tilney was present, she could almost sense he was near. The atmosphere of the room weighed upon her heavily, just as it had earlier that day in the garden. She continued to stand, one hand gently resting on the lock on the folding doors. The final threshold between her and the truth; her anxious desire to uncover this mystery grew greater the longer she waited. She began to open the door, the lock yielding to her hand with ease, and with an odd mix of terror and curiosity, Catherine stole into the apartment before her.

Darkness oppressive and impenetrable filled the room, more so than any other part of the Abbey. Even with the candle in her grasp, Catherine felt the darkness as if it was pressing down on her, an immovable force. She stood quietly for a moment, attempting to draw her courage about her. Just as she began to creep forwards, the lock on the door behind her, the very door she had used to enter this apartment, was agitated, as a person undoubtedly endeavoured to enter the room. Catherine stood motionless with horror. Surely it must be the General; she recognized those footsteps well. She could picture in her mind the walk from earlier that day, how he had stormed with quiet fury around the garden; she could picture his face, the cold turn of his features which spoke of violent cruelty. How Catherine had beat him here was something she did not consider; all she could feel was a ghastly sense of foreboding of future misery to herself. If the General was savage enough to lock up his wife, what would a villain like him do to a lady like Catherine? The possibilities raced through her head, each more horrifying than the last. How long she stood like this, she had no idea, when eventually, to her great relief, Catherine heard the sound of receding footsteps. She stood paralyzed for no longer than a few seconds when, with a desperation she had never before felt, she flung open the folding doors and escaped back into the gallery.

Reader, it is important to note that at this time, the General was doing nothing more sinister than sleeping in his bed. Catherine, in a fit of hysteria, heard the footsteps of a passing servant, still awake at this hour ensuring the doors were properly locked, and assumed the worst. She was finally experiencing a scene similar to that of her beloved novels and was finding it much farther from her liking than she had ever expected. Our heroine in training had quickly discovered that she did not want to be a heroine at all.

No longer concerned with keeping quiet, Catherine ran out of the gallery and back through the hallway, which seemed to stretch longer the faster she ran. It was with a sense of relief so great that she felt tears gathering in her eyes, that Catherine finally reached the safety of her room. She jumped hastily into her bed, not a remnant of light in the wick of her candle as she dropped it to the ground. She was back where she started, her heart pounding as she considered the events of the night. Her escape was a miracle.

Remarkably, despite how close she had come to being caught, Catherine began to quieten. The tears dried on her cheeks, her hands stopped shaking, and as she stretched out under her bedclothes, exhaustion flowed through her body. The clock struck one, however, Catherine was so deep in sleep she could not recall it doing so in the morning.