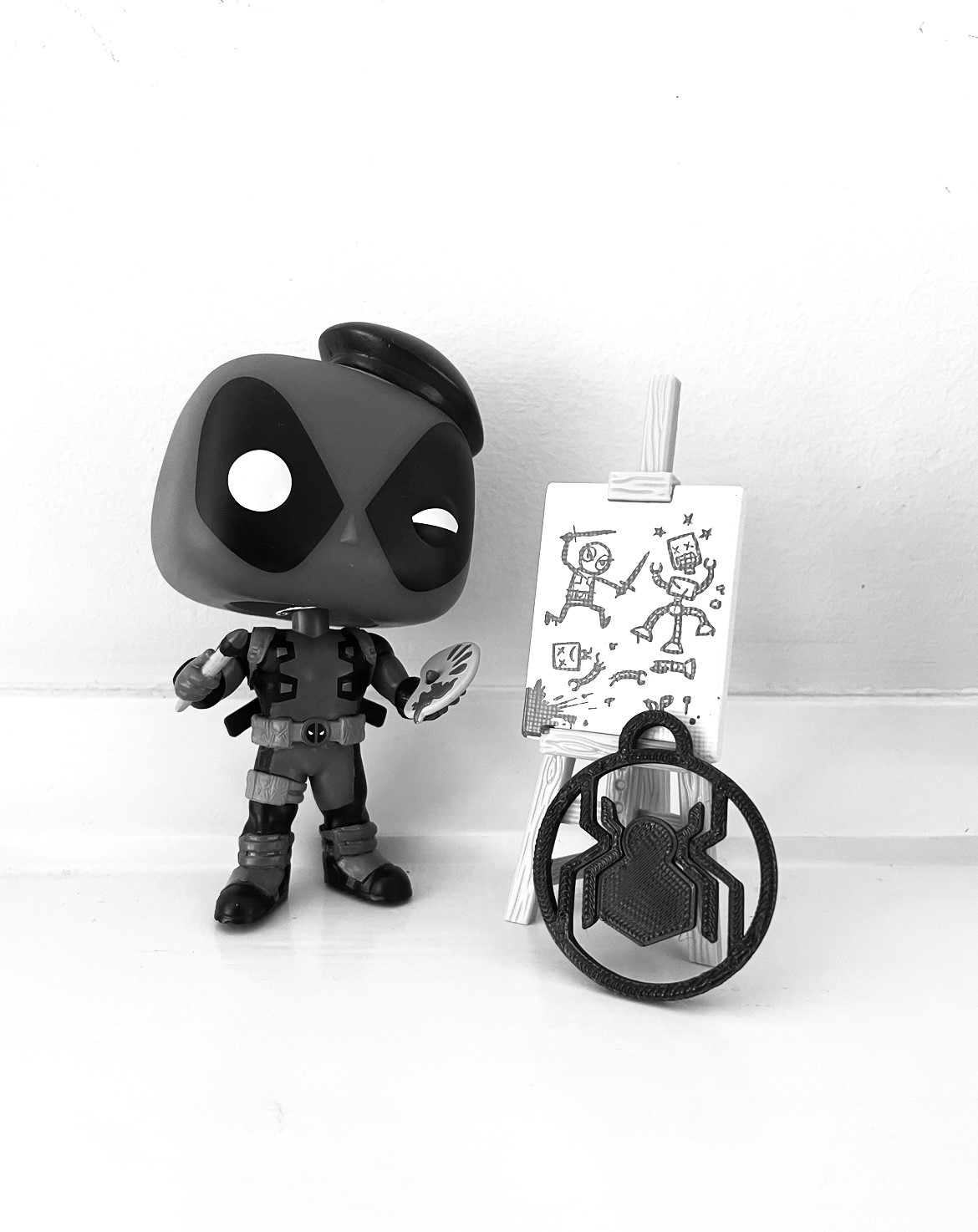 "Anna Funder’s literary non-fiction novel Stasiland and Kazuo Ishiguro’s elegiac dystopian novel Never Let Me Go both consider the necessity and desire for human connection that people experience no matter the situation they may find themselves in." An excerpt from Dominique Banjac's Year 12 English Comparative Essay. The artwork is by Jacy Lu, Tonal Treasures photography. Read the full piece below.

Funder’s novel depicts love and friendship as a tool for survival under the oppressive regime of the German Democratic Republic, who often try to leverage human connection as a means of getting the control they desire. Similarly, in Ishiguro’s novel, human connection often stands in the way of the regime’s goals, meaning connection is something that is somewhat prohibited and looked down upon, and the clones often retreat to their memories of love and connection as a means of finding comfort but do not act upon their desires to protect and fight for their loved ones. These novels differ in that human connection and using it as motivation to strive for freedom ultimately overcomes the omnipresent and tyrannical system of GDR rule, whereas the clones succumb to what the regime requests of them, giving in and accepting that connection and love cannot save them.

Connection and love are seen as a threat to both omnipotent and ever-present government bodies in Funder and Ishiguro’s novels, leading to the purposeful degradation of meaningful relationships for the purpose of strengthening the control of the state. The sterilisation of the clones in Never Let Me Go is a symbol of the innate desire humans have to form bonds and raise families. This creates a separation between the clones and those in the outside world, and it is engrained in the clones’ subconscious that they will never be able to form the same meaningful connection as the rest of the population, encouraging casual sex but inferring that forming romantic relationships is fickle. This knowledge weakens the bonds the clones form with one another, making sure they would not fight their purpose to save each other, hence serving the state whether they intend to or not. The fireplace in Madame’s house, which usually the central hearth of family and represents a passion for connection is “sealed up with a board”. This metaphor represents that the clones do not have a future that allows for them to have a family or feel the passion that human connection brings. Madame interpreted Kathy “holding [a doll] and pleading” for the baby to “never let her go” as Kathy wishing for a future where she can have a child and form a family, innocent of the future that lies ahead of her. Similarly, Funder’s novel demonstrates the state using the desire humans have for connection as leverage to help them gain more control. Hagen Koch had a deep connection to the state from an early age as a result of his role as the “poster boy” of the regime, devoting himself to building a “communist nirvana”, where connection to the state is valued above all else. Despite being told “the Party will stick by you”, Koch is betrayed by the GDR, as the love for his wife is used to make him pliable and loyal to the state first and foremost once again. The GDR grappling for control over its citizens ultimately turns the population against the state, as the love those such as Koch had for his family trumped his loyalty to the GDR, which was then punished. Koch’s plate represents the fact that the GDR stripping him of those he loved minimised his wins to things as insignificant as a plate that “shone like gold but was made of plastic”, much like Kathy’s “golden” memories that she reverts to for comfort when the regime stripped her of the meaningful connections in her life. The innate desire for connection among humans is identified as a threat by both Funder and Ishiguro’s totalitarian states, labelling it as something that needs to be destroyed, however Koch reunites with his wife where conversely Kathy and Tommy separate and allow the state to maintain control.

In both Funder and Ishiguro’s novels, connection and love for those around you is depicted as something that promotes actions that go against the status quo, even if it means putting yourself in harms way. Miriam fighting tooth and nail for the truth about what happened to Charlie and “scratching the GDR at its marrow” despite the psychological torture she endured at the hands of the Stasi and possible repercussions demonstrates that human connection and loving someone that deeply is a threat to the GDR, as connection has the capacity to eliminate fear. Miriam’s love for Charlie likens her to the Pierrot doll, someone who is lost and confused without the one they love, and willing to fight and remain loyal to him no matter the obstacles that may block her path. Like Miriam fighting for Charlie, Kathy and Tommy decide to investigate the deferral rumour, something that would drastically change the predetermined trajectory of a clone’s life. For a moment in time, Kathy and Tommy believe that the power of connection and love may have influence over the institution that controls their lives, validating the strong feelings they have for each other and insinuating that love makes them more human and worthy of a future. When they discover the deferral rumours where false, Tommy states that they “can’t stay together forever” and likens their inexorable fate to donate as a “current [that is] too strong”. The regime does not value love and connection, and despite having desired and needed human connection previously, Kathy and Tommy give up hope completely. The knowledge that their fate is out of their hands has been deeply engrained since childhood, allowing the state to separate them with ease, unlike those in Stasiland who have seen a world before the wall. Funder’s novel also depicts love as necessary in recovery as Miriam sharing her story with Funder is an act of catharsis, forming a new connection that allows her to let go of her past, unlike the clones who prefer to accept the present and reminisce in the past instead, where connection through friendship was permitted.

Human connection appears in art created by the characters of Stasiland and Never Let Me Go, helping to keep the characters afloat in the face of an oppressive regime. Klaus Renft uses this love for art to fight for freedom of expression but was quickly deemed “way too explosive for the regime” and the Stasi were quick to seize any connection the citizens of the GDR had to the band, as it posed a threat to the tight control the GDR had over all forms of media. The desire the citizens of the GDR had to form a connection to a band is evident in the enormous praise the Klaus Renft combo received, even becoming “rich by GDR standards”. The GDR sought to supress this human connection, which differs starkly from the Hailsham institution which encourages the clones to form a connection to art, in order to prove they are human. Later in the novel however it is discovered that these acts were in vain, as the visit to Madame’s house generates a new uncanny feeling about the motivations behind the gallery program. The “strange owl-like bird” on the wall creates a feeling in Kathy that uncovers that the Hailsham students’ connection to art was never what it actually appeared to be, but instead served the purposes of Miss Emily and Madame’s liberal approach to being anti-cloning, condemning it, but acting for themselves, as noted by Miss Emily’s “frail and contorted” appearance which differs starkly from the beginning of the book, representing the decay of hope the clones had of being freed and able to fulfil their desire to stay together. The human connection Miss Emily and Madame tried to create between the general population and the clones failed miserably and was eventually overthrown, just as Klaus’ music was banned by the Stasi. The desire for human connection is depicted in art in both Funder and Ishiguro’s novel, however the Stasi acknowledge the power this art wields, whereas the gallery program failed to produce a connection between the clones and the rest of humanity.

Funder’s polyvocal memoir ultimately highlights the power that the innate desire for human connection has in the face of the GDR, eventually liberating the citizens and allowing Germany to progress towards a brighter future. Conversely in Ishiguro’s novel, human connection is desired by the clones, but the deeply engrained sense that connection between clones in fickle means they succumb to the pressure to let go of one another, as they retreat to their memories of connection rather than fighting for social change. Despite the stark differences in the importance of human connection, but Funder and Ishiguro highlight the capacity connection has to create joy, hence why it is so integral to the human condition.