Focus on Creativity and Invention 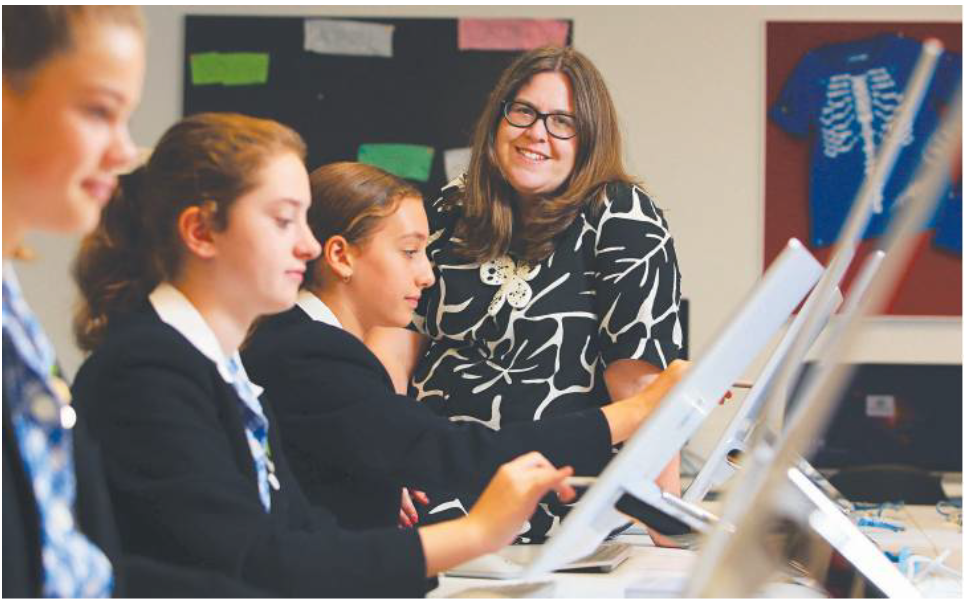 Strathcona Girls Grammar head of digital and innovation Michelle Dennis guides her pupils in a computer studies class Creativity and collaboration are key when the girls at Strathcona Girls Grammar in Melbourne take to the Tinker Train. The Australian award-winning initiative teaches problem-solving and encourages STEM thinking through “tinkering” and a process of design and trial and error.
Strathcona’s Head of Digital and Innovation Michelle Dennis says the program allows students to learn through experience, use that knowledge, then teach others.
“We look for ways the technology is going to help the students be more engaged and push
it further, or link them to an expert or a new idea,” she says. “Tinker Train moves beyond the learning to the applying.”

The model has been used for Year 6 girls to investigate sustainability and energy use in their homes. They created their own models of future sustainable homes with working wind-powered lights, automatic sun shades and hydroelectricity. In other year groups, the girls have used the game Minecraft to explore the Victorian goldfields, set up golf courses for mini-robots, and designed a new chair for the Baby Bear in Goldilocks. The educators seek to shift the student experience from passive learning to experimentation and creating. It follows a progression of  understanding an issue, identifying a specific part of the problem, brainstorming ideas, creating prototype solutions and sharing their discoveries.

Dennis says across the program they frame their technology discussions around collaborating, creation and outcomes, rather than the gadgetry and tools involved. “We think that’s really important that we show girls that when you’re doing computer science or digital technologies, there is that creative element to it,” she said. “They are inventing and making something for a purpose. It’s not just learning to code for coding sake.”

Dior Lekkas, 12, says not only is it important to learn about technology, but it is fun. Our generation is more technology-based and most jobs are going to be on computers in the future,” she says. “I love studying Digital Futures because it’s fun, and you get to learn new things on devices. I enjoy learning how to code in Minecraft and build new sorts of things.”

In the higher grades Dennis says she has used Oculus Rift virtual reality headsets in the biology classroom so the girls can experience the three-dimensional shape of a protein, or other three-dimensional model to conceptualise a chemical element. “By giving them those experiences early, it means they start adapting to this idea that technology will bring about new things,” she says. “But it’s also a better way to learn because you’re experiencing it, rather than just seeing it in a text book.”

She says it is critical for to keep girls and women engaged in STEM throughout their life, given the critical impact technology was having on society. “Our world is shaped by technology, not just in a physical way but also in the way that we interact with each other, the way we work,” she says.

“If women aren’t involved in creating that future, then our voices can’t be heard.

“If I can get girls to see that not only can they do it, but it’s really fun and interesting to use technology to create and make things and invent, then they’re more likely to continue doing it,” she says. ‘Our world is shaped by technology, not just in a physical way but also in the way we interact with each other, the way we work.’