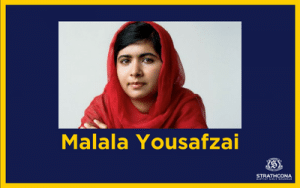 Strathcona competition
Open to all Years 5 to 11 Strathcona students.

Malala Yousafzai was born in Mingora, Pakistan. After the Taliban began attacking girls’ schools in Swat, Malala gave a speech in Peshawar, Pakistan, in September 2008. The title of her talk was, “How dare the Taliban take away my basic right to education?”

On October 9, 2012, 15-year-old Malala was riding a bus with friends on her way home from school, a masked gunman from the Taliban boarded the bus and demanded to know which girl was Malala. The gunman fired at her, hitting Malala in the left side of her head; the bullet then travelled down her neck. Two other girls were also injured in the attack.

Malala survived her attack and is an equal rights and education activist, and the youngest ever Nobel Peace Prize Laureate. Malala is an inspiration for all!

As part of our “Unstoppable girls” theme exploring bravery and courage, Strathcona has secured eight tickets to hear Malala speak at the Melbourne Exhibition and Convention Centre Tuesday 11 December at 7.30pm.  This is a once in a lifetime opportunity.

We want you to demonstrate in artwork, written prose or digital display – “What does courage mean to me”?

Send your response to malala@strathcona.vic.edu.au by Wednesday 17 October 2018

Be sure to include:

Competition entries will be open to being shared with the community via the Schools social media and publishing platforms.