Owl and the Albatross 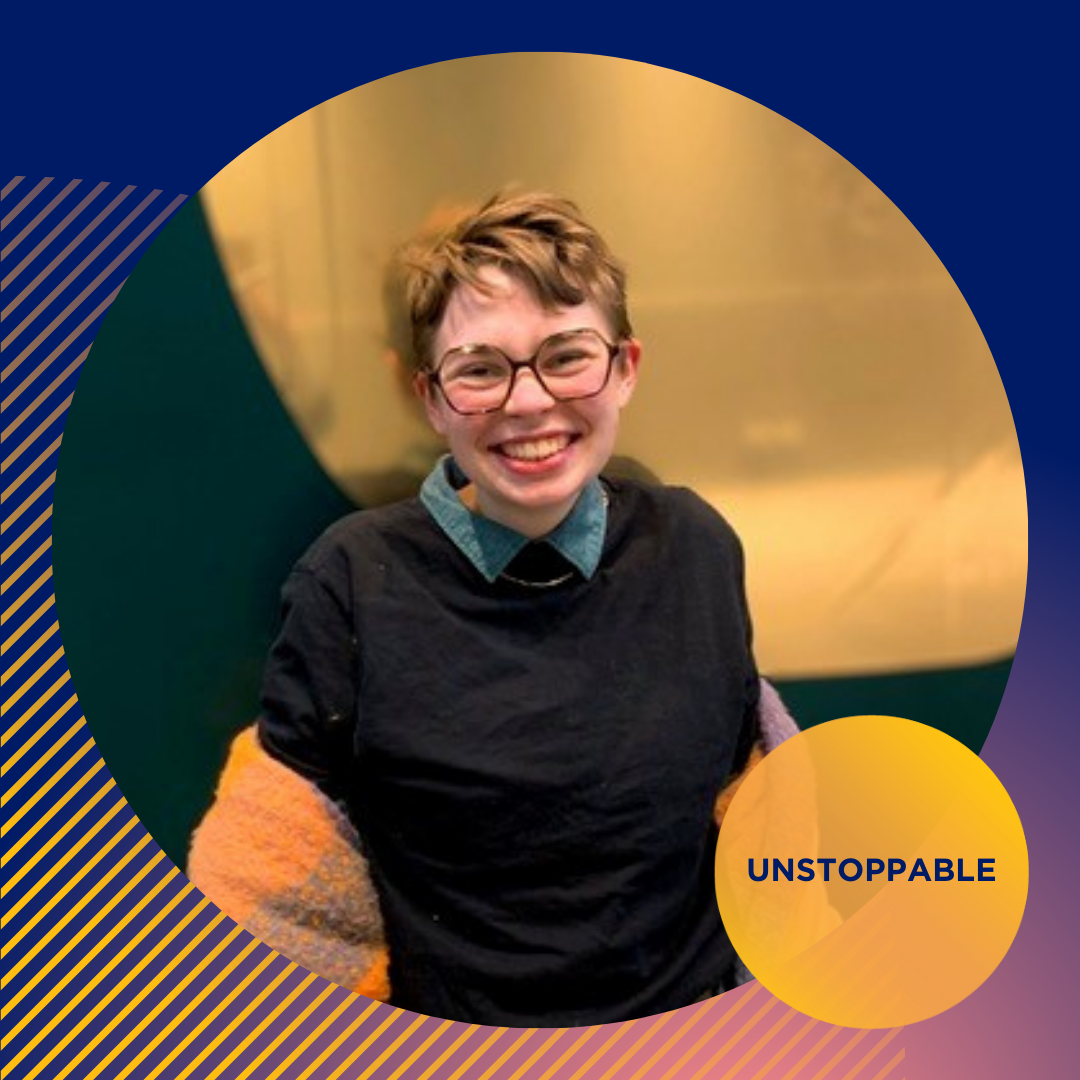 Alumni Paris Balla's ('15)play is part of the VCE Playlist this year. The Owl and the Albatross will be studied across the state. This is only part of Paris' career in theatre. Paris wants to ensure representation is visible for all. Learn more about their journey so far.

Can you explain your career journey to date?

“Career” as a young freelance theatre maker is a difficult concept to describe… Especially when half of my adulthood has been during a time when theatre has been kind of non existent…Beyond that, I’d say it has been a combination of working really really hard and also being in the right place at the right time and talking to the right person. I’ve done a little bit of performing and puppeteering in independent theatre shows, some costume and set design, a bit of directing, teaching, facilitating and now writing and puppet making. I’m also a third of the way through my PhD, so also wearing my academic thinking cap and doing about a million different projects as part of that. I don’t necessarily have a “job” but I tend to describe myself as some combination of a non binary theatre maker/performer/educator/clown/puppeteer/designer/academic/dungeon master/musician/playwright/director/gardening enthusiast/cat uncle.

How did Strathcona prepare you for your chosen career?

I spent almost everyday in CPAC, surrounding myself in the arts as much as I possibly could. The teachers who supported me throughout my studies, Mrs Rowlands, Mr Parker, Ms Nagy, Ms Horsley (just to name a few), showed me that passion for the work you do is so necessary,  and that doing your work with joy is the best way to do it. One of the truly influential experiences for me was when I was one of the School Dance/Drama Captains in Year 12. I started up a drama club for Year 7s and 8s that I ran every week at lunch time and getting to work with younger students and see their confidence and friendships grow over the year was the best thing that I got to be a part of in my 13 years at the school. I came out as queer quite publicly when I was in Year 12. I wasn’t aware of anyone in years before me who had been out, but I was very aware that students from other year levels knew me as that bisexual drama kid. Being drama captain I was a mentor in a very literal way to the members of our little drama club, but I was also very very aware of my unofficial position as a role model for younger LGBTQ students. I had people from not only my year, but year levels below me come and ask me for advice on things that it was still scary to talk to people about in 2015. I went on to start volunteering with queer youth organisation Minus18 and that in combination with my little drama club truly has spearheaded my career.

What did you study?

I had this idea in my mind that the only way to “do theatre” is if I studied at VCA, NIDA or WAAPA and I started working on an audition for VCA but my quite terrible anxiety, depression and undiagnosed ADHD decided for me that I would not be preparing an audition on top of doing VCE. I ended up going to Monash and completing a Bachelor of Arts with a major in theatre and a minor in performance (a degree which no longer exists due to cuts), including a unit in astrophysics because Mr Hamilton made my brain constantly itchy for physics that needed much more maths than my brain was designed to handle.

In 2019 I took what was meant to be a gap year that evolved into me studying Bouffon with Italian physical theatre master, Giovanni Fusetti, and a five month course at the John Bolton Theatre School. I’m a big big nerd, so 2020 I went back to Monash for my Honours year in creating theatre for queer teenagers and what it means to represent yourself when there is no one like you in your field to look up to. Continuing on the Big Nerd™ path I started my PhD in 2021 in a project that is currently titled “Towards a practice of radical queer hope: collaborative storytelling as future making in applied theatre” which really means “why doing theatre is good for making queer teenagers feel like maybe the world is scary but in a way that we can cope with if we work together and also do clowning, puppetry and Dungeons and Dragons???”

Who/what was the major influence on your career path?

Mrs Rowlands and Mr Parker absolutely, along with every play and musical that I was involved in at school. I am so incredibly grateful that I went to Monash, specifically for the Monash Uni Student Theatre (MUST) and the artists who work there, Yvonne Virsik and Jason Lehane as well as all of my co-collaborators and very best friends who I have met through my many many years there. My academic practice and my artistic practice are very much messily squished and tangled together and influence each other constantly. Being a scared, queer teenager who felt so alone and becoming a scared, queer adult who realised that there are so many people like me really was the main thing though. I’m doing the work that I do for anyone who feels like they’re alone and misunderstood to say “Hi! Me too!”

When did you decide that this is what you wanted to do?

I think I’ve been slowly deciding more and more every day for about 10 years. I’ve loved theatre since my days in the Year 6 play in Junior School (despite forgetting my line) but kept getting the message that I needed to have a backup option, that maybe the arts would be okay as a hobby but not as a full time thing. I decided when I dropped chemistry, I decided a bit more when I chose to minor in performance instead of in French, I decided again when I told my family and my ex girlfriend that I refused to get another job in hospitality and would keep applying for as many jobs as I could until I got one in the arts (as a drama educator), I decided again when I kept doing theatre during the lockdowns, I decided again when I started pitching my play Owl and the Albatross to big theatre companies, and again when I decided to do a PhD and everyday when I feel like what I’m doing is hard and scary and frustrating but keep doing it anyway.

What are your career highlights?

I’m in the middle of it at the moment. At the end of 2019, my friend Ryan and I decided to pitch my play Owl and the Albatross to Theatre Works in St Kilda. I started writing the play earlier in the year when Ryan told me he wanted me to put on a play in the bedroom of his absolutely tiny dark, damp, and dusty apartment. He gave me three weeks to write the first draft. In November we then put in an application to Theatre Works where Ryan was interning, mostly just as an exercise for us to practice applying for things. We met with Artistic Director Dianne Toulson in the little courtyard out the back of Theatre Works, sitting on broken chairs. She asked us what we wanted and I said that “Maybe we could do a night or two during Midsumma (Melbourne’s queer festival), we’d share the stage with another show and we’d go on during the day and you wouldn’t even notice that we’re there!” She said that if that’s what we wanted we absolutely could do that, however she had been thinking that we should have a whole season, apply to be on the VCE Playlist then get ready to tour the state, the country and maybe even the world! A few years, 16 drafts, many, many, many hours of meetings, writing applications and developments and we’re officially on the Playlist for Drama this year with the premiere happening in June. Most of the time, I still feel like I should still be in high school getting ready to write a SAC on some play about a middle class, straight, white couple complaining about their marriage at MTC, so it’s definitely pretty overwhelming to think about students around the state coming to see my story of a non binary teenager, an albatross and a lonely lighthouse keeper trying to change the world. My name is going to be written in people’s exams this year! Wow!

What day-to-day thing do you enjoy about your job?

Any time I get to work with kids and teenagers is just absolutely the best thing by far. Also any time I get to make something with my hands or just get to play and be silly. Oh and I get to play Dungeons and Dragons with my best friends and call it research, that’s pretty cool.

What core attributes do you need for your chosen career?

What advice would you give to someone looking to start in your industry?

Be nice to people! People often tell me I’m very good at networking, but the secret is I just treat people that do work I’m interested in like they are people and I ask them about their work and why they love it. I also work incredibly hard when I am in the room with people working on a project. The combination of working hard and being nice to the people you work with can get you very far in theatre (hopefully in other industries too!). Also, go and see as much stuff as you can! So many places have cheap tickets for students, and there is such cool stuff happening off of the big stages in secret corners of Melbourne.

Your mental and physical health is more important than work or study, and your work and study will improve if your health improves. I was having panic attacks daily for most of Year 11 and 12 while trying to force my undiagnosed ADHD to conform to neurotypical study routines, getting 3-4 hours of sleep all while also trying to understand my gender and sexuality and dealing with puberty and all that nonsense. In a shocking turn of events, looking after my mental health, getting enough sleep, drinking water, finding the medication that I need to make me function – all these things meant that I am happier, healthier, more productive and a better student. Hopefully whoever reading this is having a swell time, but if you’re not it’s important to acknowledge that. Trying to push through whatever you’re dealing with just means you’re going to burn out harder and faster. So look after yourself please?

(Also, come see Owl and the Albatross in June, even if you’re not studying Drama.)

PrevPreviousStrathcona Centre for Learning Futures: Visions of the Future
Next‘If you’re not playing the long game, you’re not getting my vote’: What young people want politicians to know.Next