Listen Up: Here’s How To Break Into Tough Male-Dominated Industries 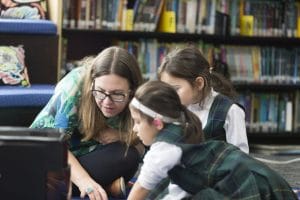 Wise words of boundary-busting wisdom from a woman who’s done it herself.

Michelle Dennis is the Head of Digital Learning and Innovation at Strathcona  Baptist Girls Grammar and she’s on a mission to get more girls and young women into the tech industry.Dennis admits that it’s a bit of a boys club, as is the wider STEM field — that’s science, technology, engineering and maths for those not in the know — which can be a turn-off for aspiring young women. In fact, only 30 percent of female students worldwide choose STEM-related fields of study a 2017 report by the United Nations Educational, Scientific and Cultural Organisation showed.
Own your strength. Step up more, speak up more and push back more. Find your community and if you can’t find it, make one.
Dennis knows this first-hand, as she was once herself one of a few females in a sea of males studying Computer Science, and has had to prove herself throughout her tech career. She shared with ten daily her tips, tools and inspiring, confidence-boosting advice for women aiming to kick-butt in not only STEM, but any traditionally male-dominated career for that matter.Go get ’em, gals.

How difficult was it for you to break into a male dominated field?

I went to an all-girls school — I’m actually a past student of Strathcona — and one of the benefits of this is that I didn’t realise at the time how unusual it was for a girl to be interested in Computer Science.

This changed the day that I turned up at University. The lecture theatres were huge, but I was one of only a handful of women. In many tutorials, I was the only woman in the room. I very quickly came to understand how male-dominated the field really is.

It is hard to express just what a strange feeling it is to be in a minority. It affects the culture in ways that can be hard to put a finger on. It can feel very isolating sometimes. I did a few electives in the Arts faculty and this made the difference in terms of culture more obvious.

Did you have many setbacks? How did you convince yourself to keep going?

I have to prove myself very quickly. There is sometimes an unspoken assumption that I don’t have the same understanding of technology. (And sometimes it’s actually said.) To debunk this, I often find that I have to drive the conversation into a more technical level early, to assert my expertise.

Do you think it’s easier these days for girls to break into male-dominated industries?

The current climate is much more promising than it used to be. It feels like women are stepping up more and some great men are supporting us. There are organisations like Girl Geek Academy which create opportunities for women to network and find mentors. Ross Symons, of Big Ant Studios, is also a great supporter of women in technology.

That said, there’s still an element that does not welcome women entering what they see as ‘their’ area.

I was recently in a discussion with a guy on Twitter who made the claim that there was nothing stopping women from taking part in eSports — they just weren’t as good at it. He asked for evidence to the contrary and, of course, I’m always up for a challenge.

One of the pieces of evidence I found him was an interesting study by Kuznekoff and Rose (2012) which found that female voices receive three times more negative comments as the male voice. Why would you choose to participate in a community when you receive more harassment?

I’ve heard it said that women are just not as naturally as good at technology as men are. This is such a damaging view, because this kind of stereotyping prevents girls from pushing past the barriers. It’s a self-fulfilling prophecy. If someone tells you that you’re not good at something, then you don’t want to try.

What is your advice to a young woman who wants to break into a male dominated industry but is scared?

You’re not alone. Find a mentor, through the Twitter community (#womeninSTEM is a great start), Girl Geek Academy, Robogirls or work experience. Support and coaching makes it a lot easier to find your ways in.

One of the lessons that I’ve taken far too long to learn is that you need to be confident to put yourself forward. I used to think that if you just quietly did a good job, that was enough, that someone would notice. The thing is, that’s not how it works.

I used to think that if you just quietly did a good job, that was enough, that someone would notice. The thing is, that’s not how it works.

A lot of guys are a lot more confident about promoting the good things that they do. It’s not selfish or immodest to speak up, so long as you have something useful to share. Amy Schumer has a great skit called ‘I’m Sorry’ that demonstrates this in a hilarious way — we need to apologise less and stand up more.

What if they get knocked back? What should they do next?

In any competitive field, you’re going to get some knock back. That’s why you need a support crew, a network that can offer you advice or just listen to you vent.

You need people both within the industry, but also people who can provide perspectives from outside it. That way you can stay balanced. They will be the people who help you pick yourself up and find another way.

Is it worth reaching out for a female mentor?

One of the things I am trying to do now is to offer support and mentorship to the students and colleagues that I work with. It’s important for people who have established themselves in careers to actively look for opportunities to ‘pay it forward’.

We need more women working in technology. Technology is creating the future – the future of work, how we socially interact, how we live. If women aren’t a part of building that technological future, we lose our voice in what that can become.

Would you change anything about your career?

If I could, I would have found my confidence a lot sooner. I think I wasted time doing good work quietly. I wish I had found my voice earlier.

If you could give your younger self advice, what would it be?

Own your strength. Step up more, speak up more and push back more. Find your community and if you can’t find it, make one.

To discover more about Strathcona and its Digital Learning book for a tour.