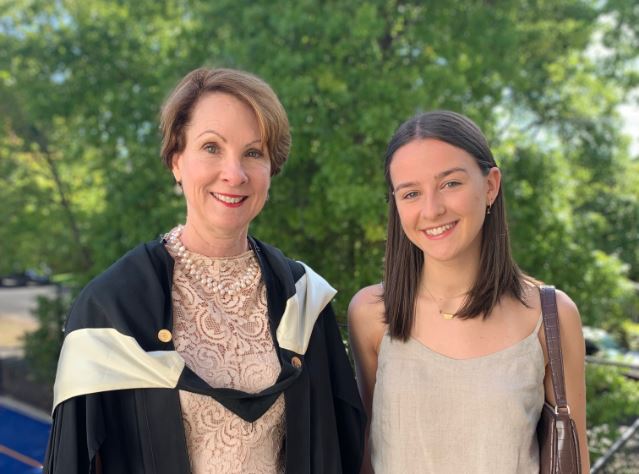 Strathcona's 2020 Dux, Kate Joseland, returned to campus and spoke at the Leaders and Scholars Assembly to Senior School students. As she reflected on her school journey she encouraged all students to embrace the unknown. #girlsunstoppable to #unstoppablewomen

Good morning students and teachers. I was thinking about what I might say to you all today, and it got me thinking back to this time last year. I remember sitting at this same assembly, listening to the girls from the class of 2019 talk about their experience, making mental notes in my head of all the hacks to ace VCE. They had some great advice, but I remember one thing they said in particular – they told us to enjoy the highs, the lasts, the moments that would close the Strathy chapter of our lives. Ironically, I recall the words formal and house carnivals being used, but, nonetheless, their advice was really valuable.

They, like any of us, had no idea what that year held in store for us – no idea that a few months later, the class of 2020’s ‘highs’ would look a little less like running a final lap around the Athletics track, and a little more like actually getting to walk through the school gates. But, the idea behind what they said that day, to stop and enjoy the moment, the people, the place, got me through the unknown of Year 12 2020. In the same way, the advice given to us by the class of 2018, or 2017, or any year before that, took its own meaning as the year unfolded, because every student’s future is unknown and unique. For example, some of my best advice from year 12 would probably involve how to eat dumplings during a Teams class without A) the teacher noticing and B) soy sauce getting on your laptop – but I hope that’s advice you won’t need.

With that in mind, what I really want to talk to you about today is embracing the unknown. Not just in Year 12, but for every year you spend here at Strathy. I can’t predict the future, so I can’t tell you how you should go about this year, or any of the ones after that, but I can encourage you to let that uncertainty be more exciting than it is scary. I moved here in year 5, and just before my first day, I remember my mum turning to me and saying ‘Kate, this is an amazing school, and I want you to take up every opportunity that you get’. Now, in the years since, particularly on those days where she found herself dropping me off at Tay Creggan at five-thirty in the morning and picking me up from netball at six at night, she’s joked about me taking her advice a bit too literally – but, it’s the best message that I can offer you.

Such a big part of the reason I loved my time at Strathy so much, is because I tried to embrace the unknown. In year 7, I decided to embrace the unknown by signing up for rowing – and over 5 years later, I have permanent scars on my hands, but also some of the closest friends I’ve ever had. In year 8, I embraced the unknown by auditioning to dance in the musical – and, I will admit, I mouthed  all the words to the songs because I’m tone deaf, but it was something different and new, and I ended up loving it. In year 11, I tried to embrace the unknown by going to the School of St Jude in Tanzania. There, I got to know some of the most incredible people I’ve ever met, and I ended up coming back more inspired than ever to become a doctor. Now, here I am, about to start my first year of Medicine at Monash University.

My point is, there is no secret hack for how to perfect your schooling journey. There will be highs and lows and curveballs, but that’s part of what makes it so special. All I encourage you to do is embrace the unknown. Jump into every opportunity that you get, because before you know it, your years at Strathy will be a collection of memories and stories, just like mine are now.

To the year twelves, good luck for the year ahead. Take it one subject, one week, one SAC at a time. As I’m sure you’ve all figured out by now, your teachers are the best mentors you could ask for. I had a rule for myself last year – try to go to class with a question. If I didn’t have one, I would try to sit down and work through a few tough questions until I did, because there is always more to know. Also, don’t let yourself get caught up in the idea that everyone around you is studying harder than you. A common year twelve phenomenon is believing that everyone goes off to this magical place where they do eight hours of study a night – but comparing yourself to others will never work. I probably spent 80% of the year thinking I wasn’t studying enough, but the truth is that there is no perfect amount. On that note, don’t feel guilty for giving yourself a break. Our year level was probably the perfect case study for whether or not it’s possible to drop everything – sport, music, social activities – and stay home studying for the entire year. But, the truth is, in the absence of those things, we just had to find other ways to wind down. It gets said every year, but it’s because it’s true – swapping out Edrolo for Netflix occasionally is ok. And lastly, and I can’t emphasise this one enough: never underestimate the value of leaning on your friends for support – make a study group, share notes, brainstorm essay plans together. Your year will look completely different from the girl sitting next to you, but you’re probably sharing a lot of the same emotions, so never be afraid to turn to the people around you.

Just finally, I would like to say thank you to my Year 12 teachers – Mrs Sowden, Madame Prior, Dr Endo, Mrs Thom and Mrs Herft – and to all the teachers that played a role in my years at Strathy, for all their passion and dedication. It goes without saying that Strathy is the place that it is because of you, and I speak on behalf of the class of 2020 when I say I couldn’t be more grateful. You took the curveball of COVID-19 in your stride, and you inspired every one of us to try and do the same, so thank you.

Whether you’re just starting out at Strathy or heading into your final year, good luck for the year ahead, and don’t forget to embrace the unknown.

PrevPreviousBack to the Classroom
NextSingle-sex schools: girls in a class of their own for optimismNext