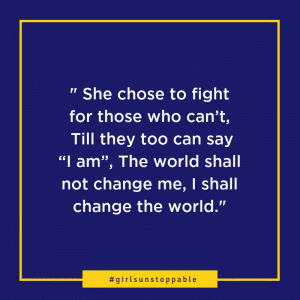 “We realize the importance of our voices only when we are silenced.” – Malala Yousafzai

Malala is an equal rights and education activist and the youngest ever Nobel Peace Prize Laureate and is an inspiration for all!

Strathcona students from Year 5 to Year 11 had the opportunity to enter a competition to hear Malala speak when she is Melbourne later in the year.

Below are the three Years 7 and 8 Winning entries.

They stood in a grid,

Hands raised to their eyebrows,

Feet planted within the soil.

They held their gaze straight,

Flickering fear behind those

Yet there was hope too,

Full of dreams not forgotten,

Hope that they finally may know,

They stood in a scatter,

Panic rising within the army,

Redness flowing from man to Earth.

Yet one shadow strengthens,

Rises to the challenge,

Until it Is a chant:-

She stood by herself,

When they mouthed the danger,

She is destined to rise above,

She chose to fight for those who can’t,

Till they too can say

The world shall not change me,

I shall change the world.

What is courage?  My mind asked…

My heart replied, “Courage is myself”

I didn’t get it at first…  What do you mean heart?  Why do you say courage is yourself?

Silence, just silence at first…  Then the 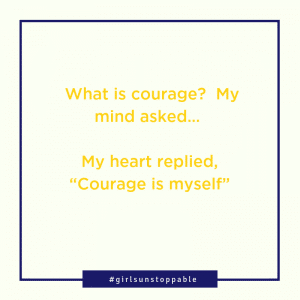 Remember when you first started high

school, how afraid you were?  Then I

took you in my hands and helped you

Remember when you had to give your

first speech, how frighten you were?

Then I moved your lips and helped you

Remember when you played your first grand final game, how petrified you were?

Whenever you are fearful, I will always be there.

Your heart will make you courageous and drive your fears away.

What does courage mean to me? Courage defines who you are today and who you will become tomorrow. Remember the first time you tried walking as a toddler and you fell down? Well you didn’t give up, no you tried again and again.  I recall my first basketball game where we lost. I felt sad and sorry but I was courageous too, as I said I love playing this game, and went back for the next game.

Everyone has differing amounts of 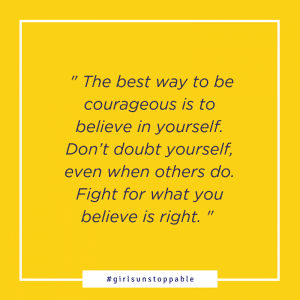 courage inside them. Different people can
have different situations where
they need to use courage. For some it
could be to battle sickness like cancer
which means dealing with pain and
treatments then being able to pick
yourself right back up again, or for
others it could be as simple as losing a
sports game and having courage to
play again next week.

To be courageous you also need bravery. Bravery allows us to be courageous to undertake a task even when you’re scared half to death. I was brave and courageous when I started at Strathcona. I was so worried about what people would say about me, how I would cope with all the new timetables and rooms, but I put on a brave face and just got on with it.  I am so glad to be courageous because it means I don’t miss out on opportunities that are offered at school.

The best way to be courageous is to believe in yourself. Don’t doubt yourself, even when others do. Fight for what you believe is right. Otherwise you won’t get far in this world.