Creative Response to The Freedom of the City 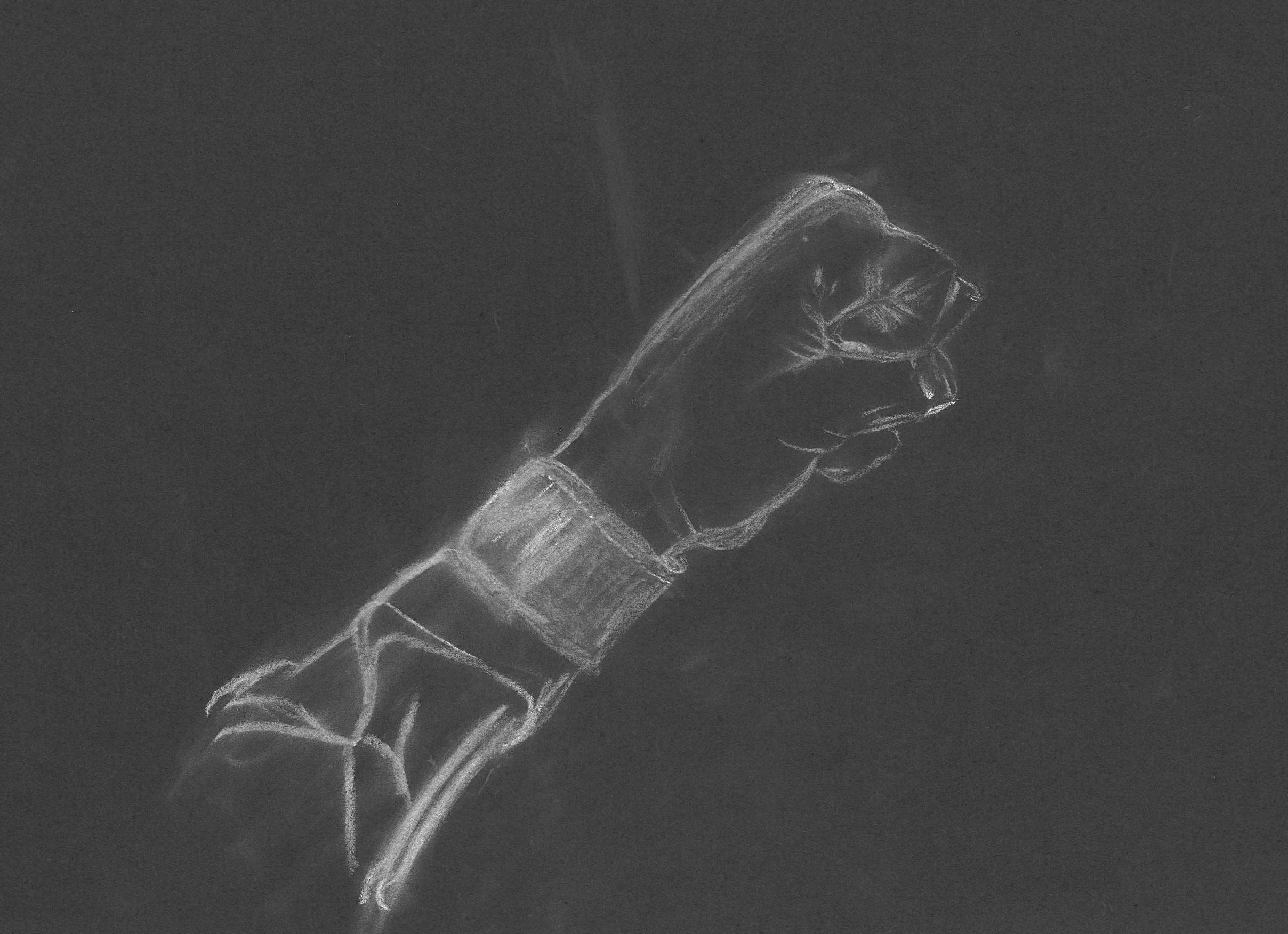 The stage is fully lit. A civil rights meeting is being held in Guildhall Square and is being addressed by a WOMAN. She is holding an old loudhailer in one hand and has been caught by a watercannon – her hair is drenched. An excerpt from Saskia Heng's Creative Response to The Freedom of the City in Year 11 Literature. The accompanying artwork is by Tabitha Marsland, Year 7, an Observational Hand Sketch Pastel on Black. Read the full piece below.

the crowd) Joseph Byrne, why have you marched Lecky Road this sunny Tuesday? (Pause) I’ll tell you something, Joseph: I seen you feed your last bite to your wanes in the cold of winter. I seen you sell your coat fresh as the day it were bought for their bus fares, too. And you, Eileen O’Sullivan? You march for the three boys and five girls you mother who got no running water. And you, Conor McCarthy? Because you, young fella, have to care for the granny and give up your job for it. Now, according to the all-powerful and fair law, with no place of your own you can’t vote in county elections-

(The WOMAN is interrupted by cheers of the slogan: ‘One man-one vote!’ and fiery applause.)

WOMAN: We march because we are kept on our bloody knees as the

Union Jack flies above our heads – our wanes’ heads! You want a better life for them nor the life you had! Every man’s entitled to justice! We are defying the odds and challenging them saying our wanes will come to be part of the fourteen per cent. And we will march till they listen! The time for disciplined and dignified meetings is over; if them Unionists want respect and trust; they must earn it!

(The amplification is faulty and briefly ceases to work. The CROWD cheers raucously. The Army and police forces appear on the battlements.)

WOMAN: In the words of Martin Luther King: ‘the time is always

right to do what is right’. We will follow in the steps of them across the oceans! We have suffered enough! We fight for freedom – for Mother Ireland! For Mother Ireland! D’you think they stand a chance against us gutties? Soon we will be the victors and Liam O’Kelly will tell the world of the Irish heroes in fair Derry. And when we’re interviewed, we tell them we was fighting for what’s right. We tell them we was waking up, and we was demanding what was stolen from us! We been paying thrice what we owe!

(The CROWD becomes increasingly restless and agitated as the Army and police presence grows.)

WOMAN: Us in the west suffer while them Royals and that

Chichester-Clarke continue giving the money to the Brits in the east! That is our money! And now we’re stuck depending on them that want nothin’ with us – them soldiers that’s here right now pushing us back. They call us powerless, but the poor are the majority and we will free Mother Ireland of the Queen! The land we stand on belongs to us, not them big London businessmen and bankers! Aul Niall MacCumhaill didn’t pave this square on his hands and knees for them, he did it for us Irish heroes. Billy Broderick don’t sell the freshest groceries in all the Kingdom for them, but for us. Celia Cunningham don’t break her back sweeping our streets for them, she done it for us! We’ve waited too long now to show them they’re no better nor us! No stronger nor us, nor smarter nor us and don’t deserve more nor us!

WOMAN: We don’t deserve our only running water being the water

running down the walls. We don’t deserve the feeling of empty bellies as we lie in bed at night. We don’t deserve seeing our neighbours freezing the winter away on the street. And all this time, they just sit in their thrones like wee saints and not one of them fellas lift a finger. Lookat – they send them polis and the Army here to Guildhall square, our land, to quieten us, but stay put in their grand buildings. They are completely unconcerned with how we live. They can’t ignore us forever! We will be England’s victims no more!

(Suddenly all sounds are drowned by the roar of approaching tanks. Their noise is deafening and fills the whole auditorium. They stop. Silence for five seconds. Then the WOMAN who is addressing the meeting:)