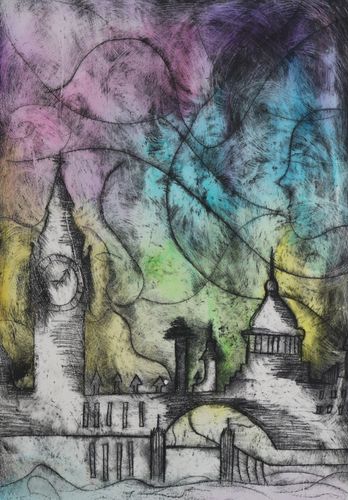 "Dear Diary, Have you ever thought about thunderstorms? The strange phenomenon they are. It like the sky puts on a firework display but instead of playing laughing from joy, they squirm with fear. Thunderstorms are quite a peculiar thing to like. The funny thing about thunderstorms is that there is always a rainbow after them. That wasn’t the case that time." An excerpt from Lara Munro's, Creative Response in Year 8 English. The artwork is by Zoe Sipos, Narrative Mixed Media.

Today the grass was still drenched from the storm yesterday, and the smell of water and a dew still filled the air. Matthew had told, that after a storm it’s almost impossible to start a fire, because the paddocks are wet and the fire wont light. That statement had made me think. What about house fires? What if I burnt something in the kitchen? What if I forgot to turn the oven off after Nan and I made Anzac cookies? Wouldn’t that start a fire? I realized that it is still possible to start a fire. It is possible for something to go wrong.

I’ve been reading a Novel called ‘The life and times of Gracie Faltrain’ and the truth about the main character Gracie, is that she doesn’t really understand herself, or the things that go on around her. It’s like the earth beneath her keeps shifting, like there’s a catastrophic earthquake capable of tearing down skyscrapers with just one hit. But all she wants the earth to do is, stay still.

Sometimes I know things are going to go wrong or somethings not going to work out. But I don’t do anything about it. I watch the fire burn after the storm.

Matthew had wanted to ride his motorbike on the wet track today. I knew it was a bad idea, but I went along with it, I made that decision. I also made the decision to let him wear short pants, not caring if the exhaust pipe burnt him. Because what’s the likely hood of that, right? That’s what I thought. Racing like he’s being chased by a demon, Drifting corners like he’s straight out of ‘Tokyo Drifting’. He’s a good driver there’s no doubt about that.

It was all fine, till he lost focus. Riding straight over a rock causing him to lose his balance and have the exhausted pipe come crashing down on his leg. Buring his skin. While I was standing there thinking, “This is all my fault. Maybe if I had spoken up. This wouldn’t have happened.” I managed to get his leg out from under the bike, that wasn’t enough, to make up for him not being able to go to championships, for his dream sport. If only I spoke up. If only I had been less like Gracie. If only I had put out the fire.

I stand here writing this with my hair blowing in the wind and grains of sand sprinkled like salt and pepper over my feet. I investigate the fire like horizon and think. One of the happiest moments in life, is where you find the courage, to let go of what you can’t change.

PrevPreviousCreative Monologue Task on Falling from Grace, by Jane Godwin
NextAnalytical Essay on The Complete Maus by Art SpeigelmanNext