#COLAB: THE TINKER TRAIN ARRIVES AT PLATFORMS 7 AND 8 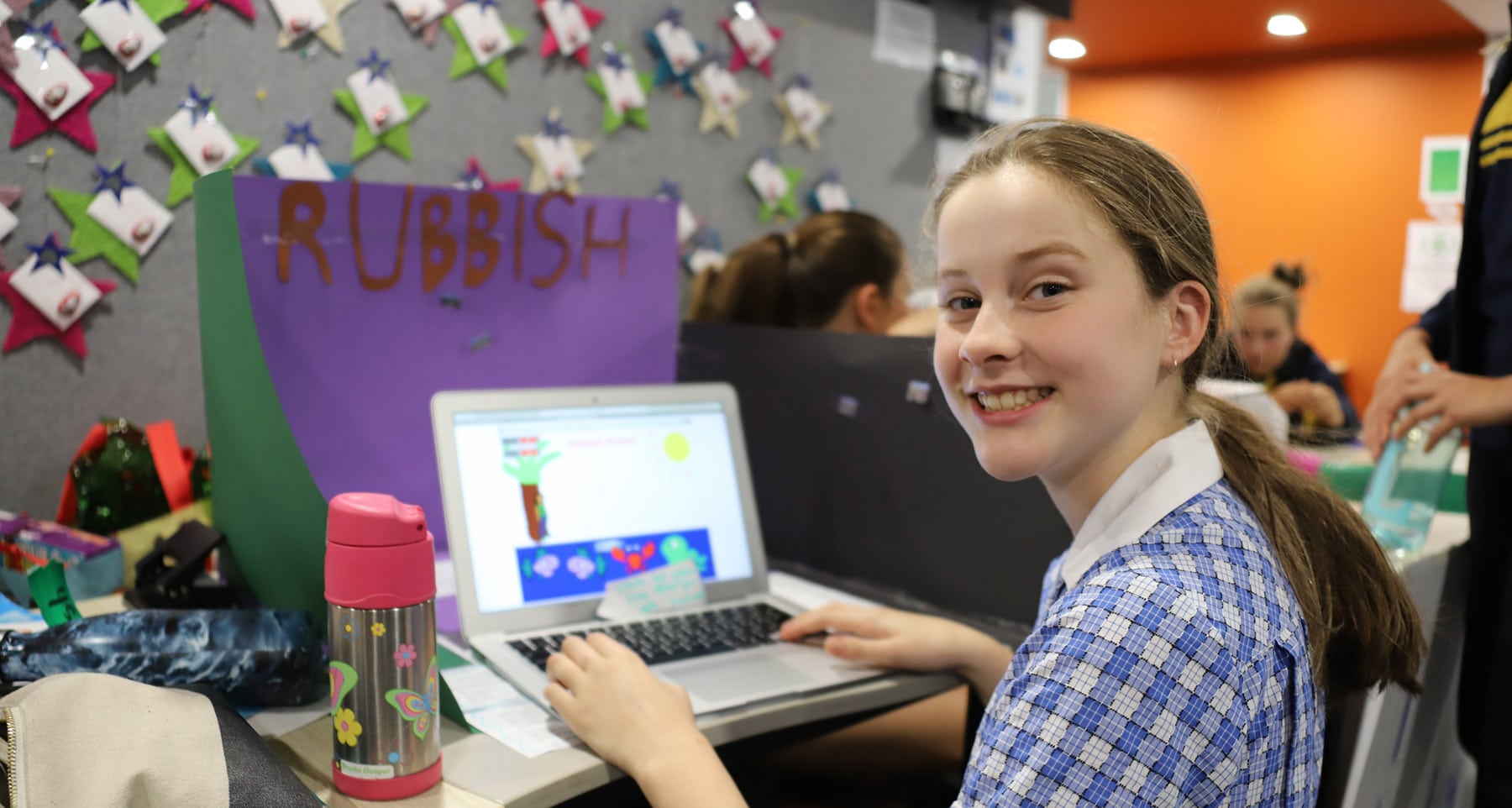 In eighteen periods over the last two weeks, the Year 7 and 8 students engaged in an intensive transdisciplinary curriculum experience called #coLAB that focussed on a number of the most prized aspects of a contemporary education. The # acknowledges contemporary interactions and community through technology, the co stands for coding, the LAB suggests a hands-on experimental or tinkering methodology and collaboration is in the name as well. In this brief time these students were tasked with a challenge: to produce a working video game that addressed a social issue.

A lot had to happen fast: team formation, development of coding skills, immersion in a social issue, design of a game and presenting it to the public.

For many, it was their introduction to coding while others could build on prior experience. Coding is a skill that is frequently mentioned in studies about the future of work, is a part of the Victorian Curriculum and has a range of benefits for learning. It provides a foundation for careers in STEM fields and is a creative act. Coding something interesting takes time and some trial and error. As such, it is difficult to teach it in a period from week to week so we decided to redirect our established transdisciplinary program SEED to enable an intensive experience for both year levels that would enable them to make quick progress.

The creative element also meeting aspects of the Creative Thinking component of the Victorian Curriculum was not only expressed through writing software, but through juxtaposing the technological with the social to produce an experience for others intended to influence positive social change. Also, the students developed graphic objects for their games and presented their computers in elaborate surrounds reflecting the concept of the arcade game. Design and aesthetics featured strongly.

Creative Thinking is paired in the Victorian Curriculum with Critical Thinking. Students had to grapple with the concept of a social issue. They were presented with a number of examples including animal welfare, fake news, plastic and packaging and were provided with some readings and videos via MyStrathcona to immerse themselves in the issue of their choice, or they could explore a different issue. Critical thinking requires students to challenge their thinking and that of others and to not take what they are told for granted, so important in a world of many voices, wise and otherwise.

But what do you do with an emerging grasp of coding and a social issue? #coLAB’s answer was to make a game. Gaming today is a pastime but it is also a vast industry, a driver of technology and even a lucrative spectator sport. Gaming techniques are used to train pilots and surgeons, to motivate people to healthy living and manage finances. Gamification is a term that has developed to apply to the many situations where the elements of games are used in other activities. Education has long used elements of gaming, such as scores, competition, rules of play and rewards. In #coLAB, the students not only played existing games and built their own but the learning experience was gamified as they were rewarded with tokens along the way for working well together and supporting their peers. These tokens could be banked at the end of each session and used to purchase extra support and items like game controls or even mentos.

The Year 7 and 8 students needed to get inside the thinking of games, again to engage their critical thinking. What makes a good game? They played a variety of games, both traditional and video. We even had a video game van parked on the school courts for the students to taste a range of video games. Through class discussion and a process called ideation, the students listed criteria for judging the quality of a game and developed a rubric for assessing how each game rated as high medium or low on each criterion. Through techniques of collaboration a common five criterion rubric was determined to assess every group’s games.

As the name of #coLAB suggests, collaboration featured throughout the course. Students worked with the combined Year 7 and 8 group, they worked in pairs through a ‘speed dating’ exercise to quickly share ideas and practice listening, they had roles as individuals in teams of four and they provided feedback to other teams on their games. Collaboration is one of the most important skills. It is a social skill but a vital skill in the workplace too. Often it is not just how skilled or brilliant people are but how they work with others, contribute to teams and bring out the best in others that counts. This is part of the reason why working in teams features in the Victorian Curriculum.

#coLAB culminated in a Grand Arcade of games housed in the Year 7 and 8 common area. Junior School students and Year 7 and 8 parents were invited to inspect and play the fifty odd games created by the students. They were challenged by games that tested their knowledge, their dexterity and reflexes and their ability to navigate mazes. Some games had multiple levels, settings pages, help pages, sound effects, choice of avatars and thought-provoking references to the social issue they chose to address. These references were accentuated by the designs the students developed to decorate their game.

When the students in the class I was responsible for were developing their benchmarks for evaluating games, I wrote their criteria on the board before they were transferred to the social steam on the #coLAB page on MyStrathcona. They wanted good graphics, plots, modes and progressions through levels. I confess I thought that a little ambitious and feared that the students would be disappointed that these things would be beyond their reach. However, the best games featured all of these elements, and most contained one or two. I was so impressed by what the girls had achieved. As a teacher supporting the students, I contributed but it was more in advising how to work as teams, bringing group ideas together, helping students access resources, helping them to work through logic problems in their code and encouraging them and acknowledging their work. What they achieved was not a replication of what I knew. I was not standing at the front delivering knowledge to them. I helped them go farther than they would have gone on their own but they each went to different places than I could have taken them. Who knows where they will take what they learnt next?

#coLAB is structured around a process called Design Thinking that Strathcona has customised in the form of the Tinker Train. At the front of the train is Understand, which is followed by Identify, Ideate, Create and Share. Each section of the train carries a range of tools and experiences to help engage student thinking and to help them design their own thinking. In #coLAB the students develop intellectual knowledge and curiosity, in this case, through exploring a social issue, understanding working in teams and working through coding challenges. They moved onto the Identify section where they identified the purpose of their game, they asked themselves “What might we…?”In the Ideate carriage they rapidly produced a range of ideas before choosing the idea they liked and Creating their game. The process ended with Share as they showcased their games to the community and sought feedback on them.

The chief creator of the #coLAB experience was our Head of Digital Learning and Innovation, Michelle Dennis, whose leadership and genius for engaging girls as creators with technology has recently resulted in her being named on The Educator’s Hot List of teachers and stepping into the limelight with an interview on Channel 10s Studio 10 program. Part of the #coLAB journey included professional development of teachers with Jia Cao, Bridget Forster and Melissa Patel joining me and Michelle Dennis for an Independent Schools Victoria (ISV) “incubator” focussed on design thinking, which included consultants coaching members of the #coLAB teaching team at Strathcona. A number of schools participated in this incubator and we each exhibited at the ISV premises in West Melbourne on Tuesday this week how we were implementing design thinking methodology in our schools. Strathcona certainly captured the attention of the group in what they were presenting about #coLAB. What great learning for our girls.